First Ever Halo Display Engineered By Daktronics For Mercedes-Benz Stadium 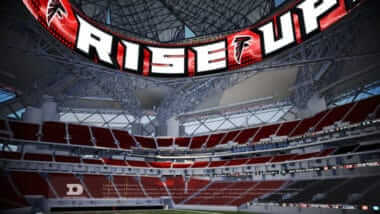 The largest LED video display in all of sports has been designed and engineered, and is now being manufactured and installed, by Daktronics (NASDAQ:DAKT) of Brookings, South Dakota, for Mercedes-Benz Stadium, home of the Atlanta Falcons and Atlanta United FC. This never-been-done-before, 360-degree halo display is a groundbreaking engineering innovation to be installed above the field as part of the stadium’s unique retractable roof structure.

Photos accompanying this announcement are available at 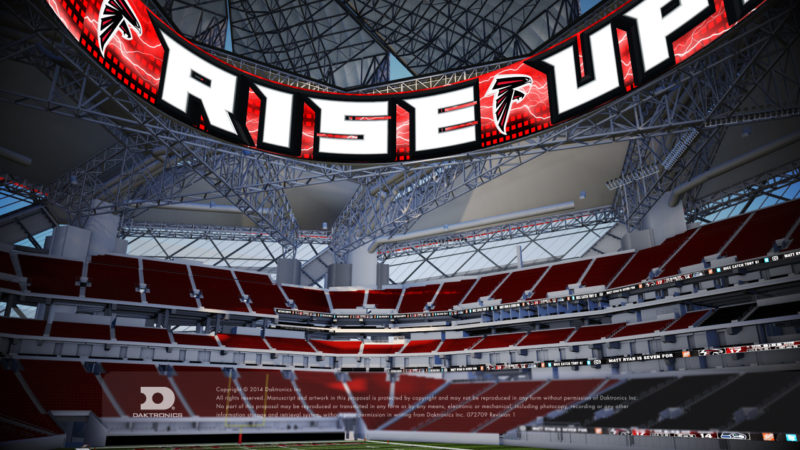 A large, first-of-its-kind mega column LED display is also being installed in the stadium and stretches 101 feet from the first concourse level to the roof. Altogether, Daktronics will install more than 82,500 square feet of video displays at Mercedes-Benz Stadium.

“Daktronics is in a league of their own,” says Rich McKay, President of AMB Sports and Entertainment. “We selected to work with them because of their dependability known throughout the industry as well as the creativity they bring in crafting something that has never been done.”

The massive halo display measures 58 feet high by 1,075 feet in circumference – large enough for a helicopter to fly through – for a total of 61,900 square feet of display space. It will be more than five stories high and nearly three times larger than the largest display in professional football.

“We’re proud to provide Mercedes-Benz Stadium with this unique, visionary halo display,” said Daktronics CEO Reece Kurtenbach. “The project is a test of engineering and architecture coordination that showcases our company’s depth and capabilities. Increasingly, there is a desire to move beyond common rectangle shapes and Daktronics has been at the forefront of the creative use of LEDs. We are equipped to be a valuable partner with our customers for complete solutions, no matter what their aspirations may be for their venue, their display systems and overall experience for their fans.”

The mega column is a four-sided display covering a building support structure with usable video space to entertain fans. At a total of 6,700 square feet, approximately 101 feet high by 71 feet around, the mega column has more square footage than the main video displays at 19 professional football venues and 24 major league venues for baseball.

These displays will provide all of today’s modern LED video capabilities using 15HD pixel layouts to provide full HD video and instant replays. They can also use variable content zoning for multiple windows to show any combination of video, statistics, graphics and animations, sponsor messages, and other game information.

In addition to the halo and mega column displays, Daktronics will install 12 other LED displays throughout the facility including fascia and auxiliary displays. Three displays will feature Ultra-High Definition (UHD) LED technology with pixels spaced 2.5 millimeters apart to bring fans into the action with up close live video and replays in two club areas at the stadium. Field-level perimeter displays are also included as part of the project to surround the pitch during Atlanta United FC events.

About Mercedes-Benz Stadium
Upon its completion in 2017, Mercedes-Benz Stadium will be a world-class sports and entertainment facility and home to the National Football League’s Atlanta Falcons and Major League Soccer’s Atlanta United. The multi-purpose stadium will host major sports and entertainment events, including the Super Bowl in 2019, the NCAA Men’s Final Four in 2020 and the 2018 College Football Playoff Championship game. Mercedes-Benz Stadium is proud to be collaborating with eight founding partners, which include Coca-Cola, Equifax, The Home Depot, NCR, Novelis, SCANA Energy, SunTrust, IBM and American Family Insurance.
www.mercedesbenzstadium.com 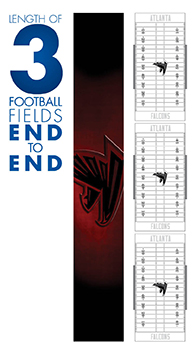 About Daktronics
Daktronics helps its customers to impact their audiences throughout the world with large-format LED video displays, message displays, scoreboards, digital billboards and control systems in sport, business and transportation applications. Founded in 1968 as a USA-based manufacturing company, Daktronics has grown into the world leader in audio-visual systems and implementation with offices around the globe. Discover more at www.daktronics.com.

SAFE HARBOR STATEMENT
Cautionary Notice: In addition to statements of historical fact, this news release contains forward-looking statements within the meaning of the Private Securities Litigation Reform Act of 1995 and is intended to enjoy the protection of that Act. These forward-looking statements reflect the Company’s expectations or beliefs concerning future events. The Company cautions that these and similar statements involve risk and uncertainties which could cause actual results to differ materially from our expectations, including, but not limited to, changes in economic and market conditions, management of growth, timing and magnitude of future contracts, fluctuations in margins, the introduction of new products and technology, the impact of adverse weather conditions and other risks noted in the Company’s SEC filings, including its Annual Report on Form 10-K for its 2016 fiscal year. Forward-looking statements are made in the context of information available as of the date stated. The Company undertakes no obligation to update or revise such statements to reflect new circumstances or unanticipated events as they occur.