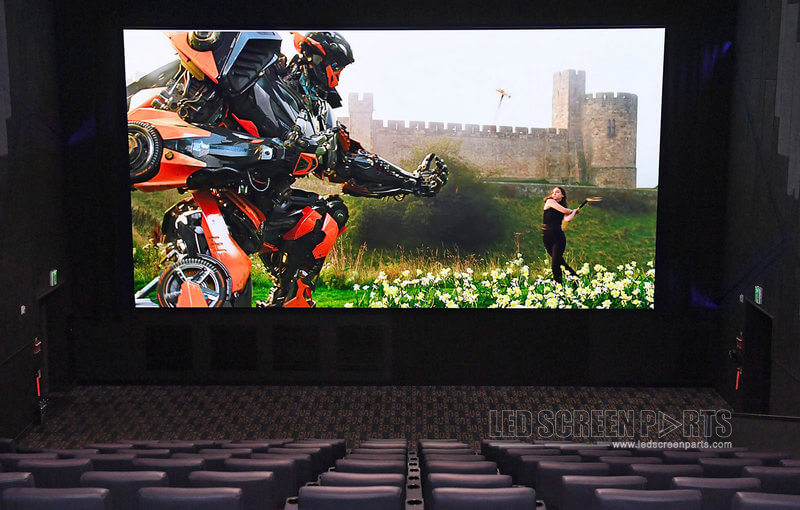 Exhibitors are dabbling in a host of new technologies and applications, from direct-view LED displays to VR gaming. Tim Kridel explores why — and how – they could create opportunities for AV firms to expand into the cinema market.

On March 22, Zurich’s Arena Cinemas will become the first European theatre — and one of just a handful in the world — with a direct-view LED screen.

It’s an ironic milestone: LED technology enables the big yet affordable TVs that have cut into theatre admissions, which declined 6% over the course of 2017, according to the National Association of Theater Owners. But now LED technology could give exhibitors another tool for making and saving money.

Arena uses Samsung Electronics’ Cinema LED Screen, which is nearly 10.3 meters wide, supports 4K and has a peak brightness level of 146 foot-lamberts (fL). The world’s first Cinema LED installation was in July 2017 at Lotte Cinema World Tower in Seoul. Sony is among the other vendors developing direct-view LED displays for cinema applications.

“It is possible that our future complexes will be Cinema LED-only installations,” says Edi Stöckli, Arena Cinemas’ owner. “We will test our installation and see what other benefits we get. For the moment the price is very high, as all new technologies are at the beginning.”

“It is possible that our future complexes will be Cinema LED-only installations.”

For starters, LED doesn’t require a projection booth. That space could be used to generate additional revenue, such as premium seating.

Arena Cinemas converted its booth into a private lounge.

“Cinema LED is the future of the cinemas,” Stöckli says. “The digital projector was a step, but it is still a projector with all its technical limits. This technology needs much less power, less cooling and lives much longer than a projector.”

Depending on the theatre, an LED screen might incur higher installation costs compared to projection.

“The LED screens weigh 5 tons, so you have to build a cinema a hell of a lot stronger,” says David Hancock, IHS Markit director of research and analysis for cinema and home entertainment.

“The cost of a direct-view LED screen is estimated to be up to 10 times the cost of a typical perforated screen,” says Mark Mayfield, QSC director of global cinema marketing. “But there is no projector, so that could be a wash.”

LED is a new technology not only for exhibitors, but also for the specialised integrators serving the cinema vertical? So it’s possible that LED could create an opportunity for traditional AV firms to expand into cinema.

“It’s far more common in the commercial AV world in applications like outdoor digital signage,” Mayfield says.  “On the other hand, commercial AV integrators generally have little experience in the nuances of the cinema industry. So there is likely to be some cross pollination, potentially leading to another type of technology convergence.”

LED also could enable cinemas in new locations or breathe life into struggling ones.

“Direct-view screens can create a much brighter image with significantly higher contrast ratios,” Mayfield says. “They could potentially revitalise drive-in or outdoor cinema, and even make it possible to show movies in daylight or indoors in full lighting.”

Like laser projection, LED displays also could spur more 3D ticket sales by alleviating the brightness problem that meant an underwhelming experience with older technologies. But audio has to be addressed to avoid becoming the new weak link for both 3D and 2D.

“A solid direct-view screen removes the option of placing sound sources where they create the most realistic image-to-picture localisation: placing speakers behind the screen is no longer feasible,” Mayfield says. “So we have to develop new methods and potentially, new technologies to create that sense of accurate localisation.”

“A solid direct-view screen removes the option of placing sound sources where they create the most realistic image-to-picture localization: placing speakers behind the screen is no longer feasible.”

All of these factors have some industry watchers speculating that LED will fundamentally change the types of technologies, companies and venue designs in the cinema space.
“LED has the potential to be a genuine disruptor of the business,” Hancock says.

Out with the old? Not so fast

Direct-view displays come on the heels of two other formats and technologies generating buzz: high frame rate (HFR) and 4K.

“HFR has not appeared to go over well with general audiences,” says Dan Cofer, Alamo Drafthouse Cinema technical director.  “I doubt we will see a huge push for that in the future. Also, there are not many releases in 4K, and it’s unclear if there is demand for it beyond the cinephile audience. We are currently looking at laser projection and direct display (such as the Sony C-LED) though mainly for premium large-format (PLF) screens at this point, as it is cost-prohibitive to retrofit existing installations.”

Meanwhile, some older formats are holding their ground.

“There has been a resurgence of interest in older formats such as 35 mm and 70 mm, and we are actively installing equipment for those formats in our theatres,” says Kimberly Sandel, manager for private and community events for Alamo Drafthouse Cinema’s Austin, Texas, market.  “Seventy millimetre was once thought to be a dying art, but now more and more blockbuster titles are being released with 70 mm prints.”
Virtual reality (VR) is another question mark. So far, it’s been a niche play.

“You’re not getting VR in the cinema auditorium,” Hancock says. “It’s more of a side thing: maybe a VR pod with 10 units in the foyer. It’s designed to complement the cinema experience, [such as] with games, trailers and stuff like that. It’s not challenging the cinema.”

For instance, VR game systems in the lobby could promote films in the hope of getting players to buy a ticket.

“This can be a good tool to keep visitors in the lobby longer and generate more concessions sales,” says Till Cussmann, CinemaNext vice president.

Like many exhibitors, Alamo Drafthouse is waiting to see if and how filmmakers embrace VR.

“We have done lobby installs for VR demos during our film festival Fantastic Fest,” Sandell says. “VR is definitely growing as a medium for filmmakers, so I expect we will see more demand for it in the future.”

But other exhibitors question whether VR will ever have a place in the auditorium.

“VR is a technology for individual use,” Stöckli says. “We sell collectivity in our theatres: the togetherness of movie-goers, sharing the same emotion at the same time.”
Multi-player gaming is a form of togetherness.

“Gaming is indeed a growing market for cinemas,” Cussmann says. “Organising gaming sessions or tournaments in a cinema auditorium is technically easy to do, but it needs quite a lot of marketing and organisational skills and resources that not all exhibitors have in-house. This is why third-party event agencies are getting quite often involved in those sessions.”

Meetings at the movies

For years, some exhibitors rented out their auditoriums for non-film events, such as all-hands business meetings. Flat or declining ticket sales have increased interest in rentals.

“The LED screens weigh 5 tons, so you have to build a cinema a hell of a lot stronger.”

The opportunity varies based on several factors, starting with the theatre’s location.
“There are relatively few that can do it: city-centre cinemas [in] big cities, business centres,” Hancock says.

Exhibitors also are competing with specialised theatres such as those in museums and other cultural attractions.  Those “institutional theatres,” as they’re sometimes called, have cachet that helps attract event organisers and attendees.

“There’s no cachet with going to an event at the mall [multiplex],” says Derek Threinen, vice president of film distribution and business development at Giant Screen Films / D3D Cinema, which specialises in the institutional market.

Sales staff is another competitive factor.

“The institutional theatres are the ones that perfected that game 20 years ago,” Threinen says. “They have a distinct advantage over the multiplex theatres with regard to having dedicated sales staff. They’re already selling these venues.”

But as the cinema rental market matured, businesses have launched to help exhibitors go after non-film opportunities.

“Companies like Fathom Events have a huge offer for alternative content and help also to market it to the right audience,” Cussmann says. “The main challenge today is to connect the right audience to the right content without having the exhibitor bearing too much risk that the auditoriums are empty and that he loses revenue compared to regular movie screenings.

So the evolution from classical cinemas towards visual entertainment centre has started and will continue to change the landscape.

“Gaming sessions, business conferences and other events are part of this change, and every decent cinema chain has today a corporate sales or event department that markets those new activities. This is not a temporary trend but will be part of the future business of a movie theatre.”

Event organisers also look at whether a theatre can support a variety of AV inputs, such as wireless mics, laptops and Skype feeds.

“The majority of current digital projector setups these days come equipped to handle most outputs,” Sandel says. “We just know when building venues to include front-of-house connections. Having state-of-the-art projection and sound equipment is really the most important part when marketing a venue even for non-film events.

“We are currently looking at laser projection and direct display though mainly for premium large-format screens at this point, as it is cost-prohibitive to retrofit existing installations.”

“Another nice addition we like to include, but cannot always accommodate, is power outlets near the seats. This is incredibly useful for day-long conferences where attendees may need to charge various devices.”
Direct-view LED displays also could help cinemas go after the non-film market.

“With this new technology, auditoriums can be screening content with full ambient light on without any compromise on quality,” Cussmann says.

Shaking up the market

For years many institutional theatres have offered 4D technologies, such as seats that move and bursts of scents. Now cinemas are increasingly adding 4D to spur ticket sales.

“We’re trying to get people back into the habit of going to the theatres again,” says CEO Byung-Hwan Choi, CEO of CJ 4DPLEX, whose 4DX systems are in over 400 theatres in 50 countries. “We see enhanced cinema experiences as the first big step in achieving that: to create an atmosphere that can only be available in theatres. Not to just sit back and watch a movie, but to really experience it, to be immersed in it.”

“Think about seeing a film like ‘Pirates of the Caribbean’ where you can experience scenes as if you’re surrounded by the waves and the sea,” Choi says. “It’s really something to experience, and there’s nothing like this out there on the market. We like to try and keep ahead of the curve.”

One way is by adapting technologies from other verticals, such as theme parks. If that strategy is successful, it’s another potential way for AV firms in those verticals to expand into the cinema market.

“We have developed our own 4DX VR technology that’s currently featured in theme parks and arcades around the world,” Choi says.

“The VR world is an interesting, growing industry which with we want to keep up. We’re always on the lookout for interesting collaboration projects, specifically in the gaming and alternative content field.”